Thousands of Twitter users are boycotting the platform from 09:00 on Monday morning for 48 hours in protest at Twitter's response to Wiley's 48 hour anti-Semitic meltdown.  Although Twitter did act to remove some of his more offensive tweets, many remained and those taking part in the boycott want his account taken down altogether.

One of those participating is Labour MP Florence Eshalomi.  This is interesting. 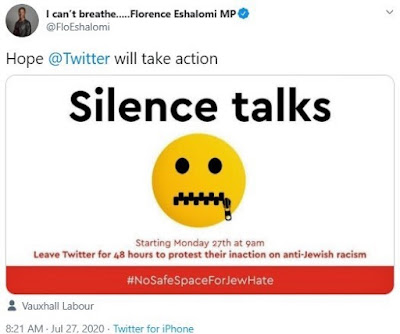 Prior to Wiley's meltdown he was followed by a number of Labour politicians on Twitter, including Corbyn himself.  As of Saturday morning this had dwindled to two and as of Monday morning stood at one.  That person is the member for Vauxhall - Florence Eshalomi.  Oops! 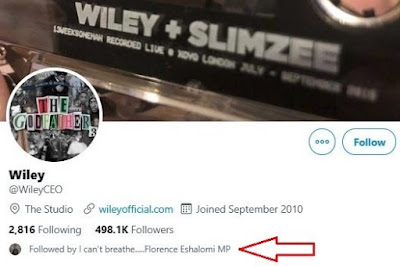 BTLP is not taking part in the boycott - not because we are OK with Wiley's actions, but because silencing individuals because of speech, no matter how abhorrent, sets a dangerous precedent.  Of course it's also incredibly dangerous for an individual to present such horrific views to half a million social media followers, but there are already laws in place to deal with this and his repeated suggestion that Jews should be shot is clearly an incitement to racial hatred.  Twitter has removed these tweets and the matter is now in the hands of the police.

There are also concerns that shutting down such dangerous individuals sends them underground, turns them into martyrs and can lead to far worse actions than words.  It's also reminiscent of the hard left's 'no platform' censorship of individuals they don't like.  In fact the boycott's official hashtag contains the leftist term 'safe space' - #NoSafeSpaceForJewHate.  The boycott also declares that 'silence talks'.  Does it?  Surely walking out of a debate leaves your opponents free to control the debate.  In any case, what does this actually achieve anyway?  It won't cost Twitter a penny and it won't force them to act.

This is a pointless virtue signalling exercise for people to indulge in identity politics, something that has appealed to some on the left.  Dozens of Labour MPs are taking part including Jon Ashworth, Lisa Nandy, Rosena Allin-Khan, Andrew Gwynne and Jess Phillips.  There are even a few in the hard left Socialist Campaign Group who are participating including Rachael Maskell, Sam Tarry and Nadia Whittome.  Of course it goes without saying that Jeremy Corbyn, Diane Abbott, John McDonnell and Richard Burgon have not signed up.

Owen Jones is taking part, although he will probably be climbing the walls by 10am as he normally spends half his life on Twitter.  Ash Sarkar is not.  Arguably the biggest virtue signaller of all - Sadiq Khan - is also not taking part.  That is perhaps the biggest surprise of all.
at July 27, 2020