The hard left Warwick University Labour Society have condemned Keir Starmer's recent comments on Black Lives Matter, in particular his opposition to defunding the police.  In a strongly worded statement on both their Facebook and Twitter accounts, the group said it was 'disgusted'.  They also described his reaction to the felling of the Colston statue in Bristol as 'horrendous'.  Unlike many of his MPs, Starmer had criticised the Bristol mob, saying their actions were 'wrong'.  Referring to his now infamous 'taking the knee' photograph, the society added: "Let us be clear, posting a picture of Starmer taking the knee is not enough.  This is performance solidarity at best".  Perhaps they do have a point with that last bit. 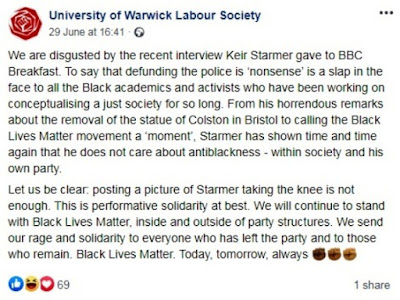 Meanwhile, here's an earlier tweet from the same group, urging people to vote Labour in order to "fight against police cuts".  You couldn't make it up.

Warwick Labour Society are not affiliated to the local Warwick and Leamington Constituency Labour Party, but are a well organised bunch of students from Warwick University.  We have encountered one of their number on these pages before.  Back in March their deputy chair Nazifa Zaman provoked outrage when she tweeted her delight that Boris Johnson had contracted Covid-19.  According to Warwick Labour Society's rogue's gallery, she is still in place as deputy chair.