Smug radio presenter James O'Brien has been challenged to a head-to-head debate by the anti-woke actor Laurence Fox.  The challenge arose from a tweet in which O'Brien sneeringly referred to Fox as 'the lad from Lewis' - the TV show for which he is most famous - before proceeding to mock his real-life character.  The tweet came amid a Twitter spat between Fox and Owen Jones over 'cancel culture'.

Fox retweeted O'Brien later that evening with a challenge. 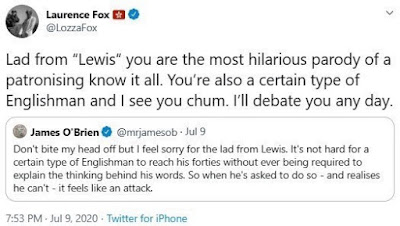 When there was no immediate response from O'Brien, Fox followed up with a direct address. 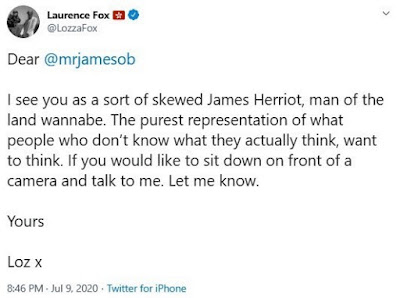 Fox has previously offered to face some of his other detractors and met with Bonnie Greer pre-lockdown.  Four days on O'Brien has not responded to Fox's challenge, which is somewhat odd for someone who sees himself as the intellectual almighty.
at July 14, 2020