Former Labour MEP Seb Dance was understandably gutted to have been out of a job in January.  Like his Remain colleagues he had fought for three and a half years to overturn the Leave mandate and was a prominent figure in the so-called 'People's Vote' campaign.  However, his motivation for stopping Brexit ran much deeper than just merely retaining his income.

Despite being born in Wandsworth and raised in Surrey, like many on the left Dance refuses to accept his British identity.  He reportedly has one Irish grandparent and used this to obtain Irish citizenship.  On his Twitter account he describes himself as a 'proud Londoner, European, Irishman' and displays three flags - the EU flag, the flag of the Irish Republic and a rainbow flag.  No mention of the country of his birth, which appears to disgust him.  On Brexit Day he wrote an article in which he described his Irish passport as his most cherished physical item.  Dance still lives in London - the city of his birth - he was elected for the London region and as such he was a British MEP.  Why can't he fly his own national flag?

Despite the realisation of the Leave mandate, Dance cannot let go.  Recently he has been espousing the cause of face masks and, naturally, he opts for a design that embellishes his love for anything but Britain. 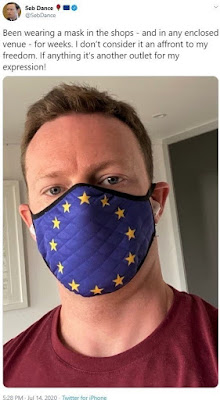 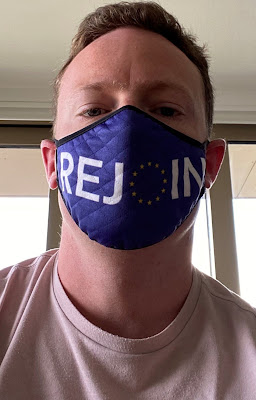