Labour's Nadia Whittome used an appearance on the BBC's Politics Live last week to inform viewers that local outbreaks of coronavirus could be blamed on people being forced back to work in poor conditions.  The hard left MP was using the traditional communist tactic of whipping up workers against bosses and blaming capitalism for virus spikes in places like Leicester.  In actual fact some sweatshops in Leicester have been operating throughout the national lockdown, as reported in the Sunday Telegraph.  So why the surge now?  Perhaps it's just a coincidence, but a few weeks ago up to 4,000 people crammed into Leicester city centre for a Black Lives Matter demo.  Of course Nadia would never suggest that could be a source.  As we know only too well - BLM protesters are magically both immune to the virus and immune from criticism. 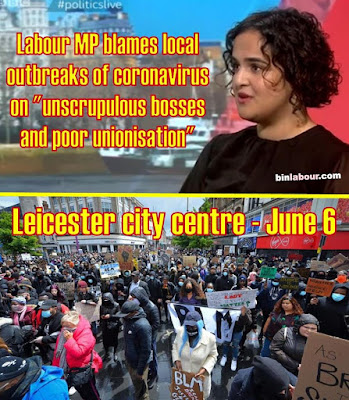