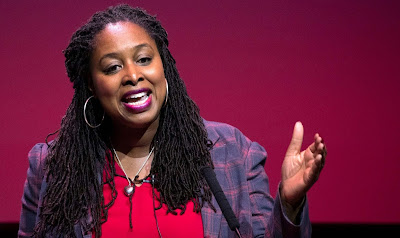 A month ago Dawn Butler went to the police to report a wave of abuse she'd received following an article she wrote for the Metro newspaper.  In the article Dawn defends Black Lives Matter protesters against accusations that they could spread coronavirus.  There's little to no logic to her argument and readers are left with the notion that the self-righteousness of the marchers is enough to render them immune from criticism.  But immune from the virus?  Just a few days earlier she wrote on her website in response to an illegal rave in her constituency: "Act like you have the virus and everyone around you has the virus.  Know that Black Asian people are 3 times more likely to die from the virus".  So in just three days this daft MP went from warning BAME people about the virus to encouraging thousands of them to cram onto the streets in protest about George Floyd's death.

The article, in particular it's incendiary headline - 'blame the government, not the marchers' - reportedly led to a deluge of hate mail for Butler.  In another twist of irony, completely lost on her, she went straight to the police with a complaint that related to her support for a movement that wants to abolish the police.  The mind boggles.

One month on from her complaint Dawn has announced that she is to close her constituency office.  She provides a number of reasons in a statement released on her website.  The first half of the statement deals with practical issues making the office Covid-safe and also rising costs.  Crucially, she says, the lease was up for renewal.  Then she spends a couple of paragraphs referring to various incidents that have allegedly taken place at the office: "My staff have been attacked in the office, verbally assaulted coming and going from work, bricks have been thrown through the windows and the frontage has been smashed".  This threat has 'drastically escalated' in recent months, she says.

Naturally, the media ignored the first half of the statement and instead focused entirely on her allegations.  Although Butler does not explicitly refer to a racial nature in the threats against her, she does infer that the abuse is related to her BLM support and alarm at Covid death rates in the BAME community: "Last month the police arrested one person and are currently pursuing others as I continue to speak out on key issues such as the impact of Covid-19 on the BAME community, the death of George Floyd and Black Lives Matter.  I continue to receive on an almost daily basis threats of violence and death threats".

The media took that sentence and race became central to their stories.  The BBC report does not refer even fleetingly to her virus and costing concerns and none of the news reports appear to take any notice of the fact Butler states quite clearly that the ongoing threats are "not the primary reason for its closure".

Asides from the one-sided nature of the media coverage, there are a number of confusing and inconsistent aspects about the story.  While the thrust of the media narrative is to suggest that the 'drastic recent escalation' is to blame, they do not provide much substance to that beyond quoting a couple of abusive emails.  Dawn's local rag the Brent & Kilburn Times carries a photo of a broken window with the caption: "Dawn Butler's office constituency office window in High Road, Willesden, was damaged over the weekend".  However, this is a photo from an incident that occurred in July 2018.  The original article featuring the same photo can be found here.

While no-one at BTLP is condoning any threats to any MP, there does appear to be a distinct lack of substance to Butler's claims.  If, as she says, bricks had been "thrown through the windows and frontage smashed" why do we only have one photo?  Where is the 'dramatic escalation'?  Where are the photos from a recent incident that the BBC refers to in which "bricks were thrown at the office in June"?

Dare we suggest that the July 2018 incident is being conflated by the media, either through sloppy journalism or something more sinister?  The BBC report even appears to conflict with Butler's claim that a man had been arrested.  "No arrests have been made" declared the BBC, directly contradicting Butler's statement.

Why is the media not asking pertinent questions?  After all that is supposed to be the most basic requirement of a journalist.

While death threats and nasty emails are not pleasant, they are at the end of the day just words.  If people want to do real harm they don't warn you about it beforehand.  When in the past MPs have been attacked and murdered, their assailants have not written letters in advance to warn of such intent.  As Dawn Butler defiantly states: "I will never be threatened into silence".  Quite right, so please don't allow your media chums to paint you as a victim and don't use one broken window to justify a decision that appears to be about the cost of rent more than anything else.
at July 10, 2020