The statue of British hero Sir Thomas Picton is to be removed from Cardiff City Hall following a vote at last night's Cardiff City Council meeting.  Councillors voted overwhelmingly by 57-5 to remove the statue at the behest of Cardiff's Labour mayor Dan De'Ath.  The move was backed by all the Labour councillors present, plus Plaid Cymru and the Lib Dems.  Six of the 21 Tory councillors also backed the motion, while nine abstained and five opposed the motion.  The full vote can be seen below. 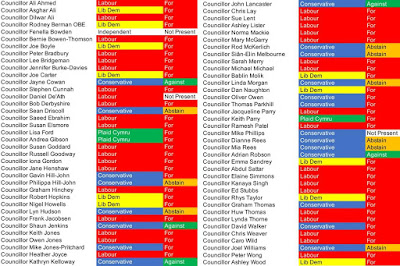 Picton was a native of Pembrokeshire and enlisted in the British Army as a teenager in 1773.  He went on to have a long and decorated career that ended at the Battle of Waterloo where, as lieutenant-general, he was the most senior British officer killed.  Picton was shot whilst leading a bayonet charge against the advancing French.

However, Picton also a profited from slavery and was alleged to have executed several slaves during his time as the governor of Trinidad.  He was later arrested and charged in relation to his activities in the West Indies, but his conviction was later overturned.

Cardiff City Council wasted no time in acting on the vote and boxed in the statue on Friday morning.  The hideous plywood box will remain in place until the planning stages are complete and the statue can be physically removed.  The mayor was there to oversee the work on Friday morning.  It's not clear at present how much the stunt cost, but it has emboldened BLM supporters in now moving on to other targets across Wales.

Picton's name can be seen on road names, pubs and memorials not just in Wales, but across the Commonwealth.  Target number one for BLM activists is the Picton monument in Carmarthen and they stand a good chance of having that torn down or renamed because the local council is run by the left-wing Plaid Cymru who masquerade as 'nationalists' but are nothing of the sort.

It remains to be seen whether the Picton name will totally disappear from Wales in the same way the Colston name is being totally erased from Bristol.

It's interesting to note that the leader of Cardiff City Council - Cllr Huw Thomas - celebrated the Picton vote by speaking out against racism and talking up the city's "proud history of multiculturalism" and "tradition of celebrating diversity".  This is the same Huw Thomas that in 2006 referred to people flying England flags in Wales as 'chavs and simpletons'.  He even espoused criminal damage to cars carrying England flags.  So much for 'celebrating diversity' eh Huw?
at July 24, 2020