It's not been a great year for the Corbyn family.  Jeremy clung to power for months as a lame duck leader and then could only watch as his successor dismantled his empire within weeks.  Jezza is currently being sued for defamation.  As the pandemic took hold his brother Piers began to promote outlandish conspiracy theories about the virus being a hoax and somehow linked to 5G.  He embarked on a series of weekly protests that would lead to his arrest and subsequent charge.  He faces trial later this year.  And now Tommy Corbyn is suffering too.

Jezza's youngest son is famed for his cannabis - sorry, hemp - business.  Unfortunately Tommy and his joint (pun intended) are being harassed by a strange man who bears a strange resemblance to his dad.  The saga is said to have begun shortly after lockdown began in March when Tommy tweeted a couple of pictures asking for information about an overnight attack on his premises in Finsburyn Park.  Tommy claims that the following man is responsible... 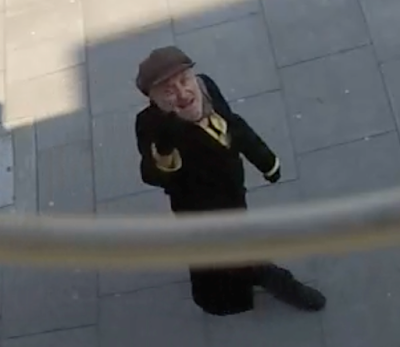 If this dodgy photo does show the culprit, can the resemblance be a coincidence?  It's one thing to be a scruffy looking old geezer with a white beard, but to cap that off with Corbyn's trademark Lenin hat as well?  No chance.  Perhaps it hinted at his motive for the attack, for Tommy has now revealed that the man also daubed a swastika on the shopfront and was arrested.  Could it be that the man was angry at the rise of anti-Semitism under his father's Labour leadership?

Tommy says the man has now returned and is loitering around outside the premises taking pictures.  Hopefully his pictures are more convincing than the one Tommy has produced.  Why is the man's head so big, where's his neck and what on earth is protruding from his overcoat?  If it's his leg that begs questions - if it's not his leg that also begs questions!

It's all very odd and that photo alone is enough to give anyone nightmares.