It's fair to say that yesterday was a rough day for Claudia Webbe.  Prior to her disastrous afternoon appearance in the Commons, Webbe endured a car crash interview on Radio Five Live.  As one of Covid-hit Leicester's MPs, she was much in demand, but the Beeb's Emma Barnett also wanted to ask her about the sacking of Rebecca Long-Bailey.  What followed was an excruciatingly painful exchange in which Webbe wriggled aimlessly trying not to condemn anyone, while it was clear that as a member of Corbyn's 2019 hard left intake of MPs she is wholeheartedly behind Long-Bailey.

Prior to the general election Webbe was not wanted by the local Constituency Labour Party and her controversial selection led to the resignation of the CLP's chair.  History will surely judge her selection a disaster.  She is clearly in way over her head and her response to this interview shows that she doesn't know when to stop digging. 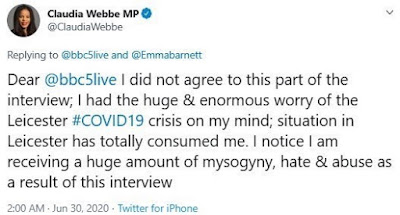 Webbe's fallback position is the typically leftist tactic of responding to any criticism by pulling the race card.  When a Jewish activist recently called out her history of defending Ken Livingstone and Jeremy Corbyn against claims of anti-Semitism she retweeted it as an example of the 'racist victimisation' she receives on a 'daily basis'.  Outstanding Claudia, bet you have a picture of Diane Abbott on your wall?  Well, she certainly likes pictures... 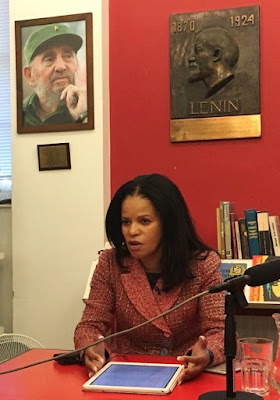