Grime artist Wiley has hit the headlines over an atrocious string of anti-Semitic tweets in the last 24 hours.  It's not clear what triggered him, but for several hours on Friday and again on Saturday he was tweeting incessantly every few minutes and even managed to squeeze in several videos on Instagram, some of which have now been removed.  In several tweets he suggests Jewish people should be shot and in one also suggests that black people who stand with Jews are 'getting bumped'.  He also hit out at Arabs who he accused of having 'Africa in a headlock'.  He also questioned the existence of Covid-19 which he said was 'all bullshit'.  Responding to accusations of racism he declared: "Black people can't be racist they can only be upset about how they have been mistreated".

Wiley's management dropped him on Saturday morning and the Metropolitan Police are investigating his racist meltdown.  There are also calls for him to be stripped of his MBE and a boycott of Twitter is being planned for Monday morning.  While Twitter has removed some of the more offensive tweets, many remain.  Here are a selection of screenshots doing the rounds.  Bear in mind his reference to 'holding the corn' is slang for shooting someone. 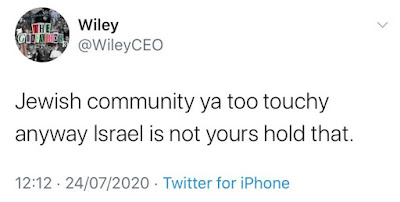 At one point yesterday the Brexit Party's Martin Daubney tried to talk some sense into him, but he was having none of it... 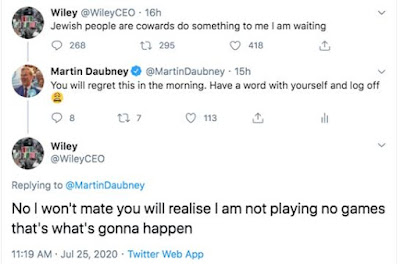 Wiley has almost half a million followers on Twitter and until this morning that included a lot of Labour people, including Jeremy Corbyn himself.  Wiley is naturally a big supporter of Corbyn and tweeted support ahead of the 2019 general election, to which Corbyn replied: "Thank you Wiley".  That thank you message disappeared from Twitter this morning and Corbyn is no longer following Wiley's Twitter account.


Despite cutting ties with Wiley, Corbyn has so far failed to condemn his actions.  The Great Leader once tweeted about Theresa May: "If you are neutral in situations of injustice, you have chosen the side of the oppressor".  By that logic we know whose side Corbyn is on now.

At the time of writing the only Labour MPs still following Wiley on Twitter are Florence Eshalomi (Vauxhall) and Sarah Jones (Croydon Central).
at July 25, 2020