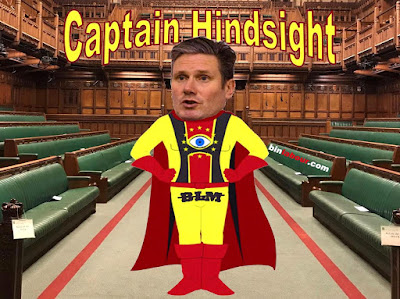 It was a lively PMQs on Wednesday as Keir Starmer predictably led with the false narrative that Boris Johnson had somehow blamed carers for care home deaths.  In actual fact what he said was "too many care homes didn't follow the procedures".  Care homes are not generally run by carers - they employ them - but that didn't stop an avalanche of criticism from the mainstream media and opposition politicians.

Starmer used all of his allotted questions to attack the PM over care homes and the NHS, but Boris hit back labelling Starmer 'Captain Hindsight' in reference to Starmer's persistent criticism of the government's handling of the pandemic.  The newly appointed 'superhero' raised the issue of hospital car parking charges in his final question, but the PM had saved his best til last.  Boris pointed out that hospital car parking charges were waived under the Tories - not Labour - and urged Starmer to "take his latest bandwagon and park it free somewhere else".

It was a strong finish from the PM and another reminder that Starmer's early success at PMQs is becoming a distant memory.  His MPs and media chums don't wax lyrical about his 'forensic' approach any more.  Watch below for the PM's biggest blows of Wednesday's PMQs, including the infamous Captain Hindsight remark that has set Twitter alight...