Last weekend there was a Black Lives Matter march in Brighton that was attended by up to 2,000 people (local news) or up to 5,000 (national news).  Note the discrepancy.  The march ended in a city park where protesters listened to speeches that included Labour councillor Nick Childs.  His speech was so extreme it could have come from any of the Marxist organisers of BLM.  He railed against capitalism, linking it intrinsically with (anti-black) racism.  He criticised the police and urged marchers to 'challenge police violence' and make things 'intolerable' for them.  He also urged white people to 'read' and challenge their 'own inevitable racism'.

Note that Childs doesn't say 'some' white people when he's referring to 'inevitable racism'.  He objectifies white people as a collective, an act of demonisation that is in itself racism.  This was just one of many ironies in his speech.  Just a few weeks after Gandhi's statue was vandalised in London by BLM supporters who designated him a racist - Cllr Childs opts to finish his speech with a quote from... Mahatma Gandhi.

It was also breathtaking how this patently middle class latte lefty chose to paint himself as one of the workers.  Last year it was revealed that the Corbynista sends his daughter to the most expensive private girls' schools in the country - the £40,000 a year Roedean School.  The revelation was brought to the attention of the public after the newly elected councillor had campaigned prominently against school privatisation.  When the Daily Mail approached him for comment he confirmed that one of his children attended a 'local independent school', but that this was 'not up for public debate' and his own views on privatisation 'should not be confused with my family's personal decision'.  Sound familiar? 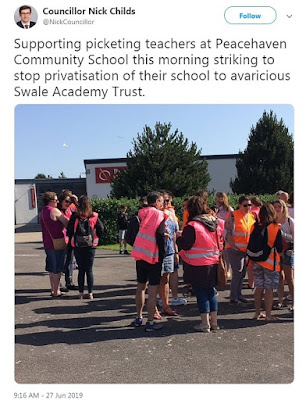 Diane Abbott, Emily Thornberry, Shami Chakrabarti, Cllr Nick Childs - it never ceases to amaze how many of those who so publicly rail against capitalism secretly reap its benefits.