The scapegoating of Angela Rayner has gone down like a lead balloon across the Labour Party and looks set to backfire on Starmer.  The timing, coming the day after he promised to take 'full responsibility' for the election disaster, has particularly rankled Labour activists.  On top of existing discontent from the left, concerns are now being raised by figures on Starmer's own centre ground.
On Friday senior Blairites were blaming Jeremy Corbyn for the disaster.  Just 24 hours later the smart ones (therefore ruling out Lord Adonis) would surely have doubted the wisdom behind sacking one of the few prominent working class women in the party - and a northerner, just to add insult to injury.  They may not be voicing their concerns in public like big-headed Burnham, but they will be questioning Starmer's judgement for sure.
Watch Starmer loyalist Ian Murray desperately trying to spin the sacking as a 'promotion' on Sophy Ridge on Sunday.
At the time of writing it's not clear if Rayner has been offered a new role and if true, whether she would be prepared to accept it after having been hung out to dry so publicly.
The chief political correspondent at The Guardian claimed that Labour MPs 'across the board' were flummoxed by Starmer's actions.

As her name trended on Twitter, the platform was full of ridicule for Starmer. 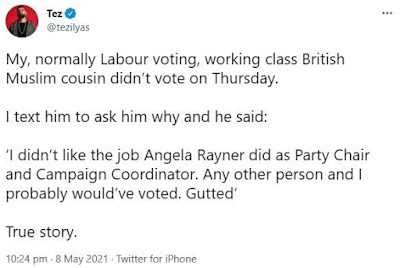 Some claimed inside knowledge, including LabourList editor Sienna Rodgers.