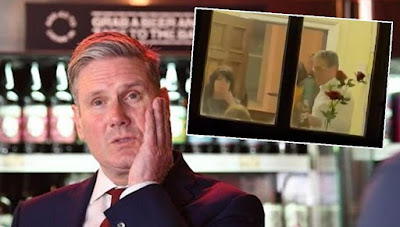 On Saturday morning a video tweeted by London mayoral candidate and Reclaim Party leader Laurence Fox shows Keir Starmer having some sort of knees-up indoors.  Fox tagged Starmer in the tweet and wrote: "It would seem that the mask has already slipped for ⁦Keir Starmer.  Don’t share widely.  No-one is perfect".
The video is filmed through the window of a building and shows a bespectacled Labour leader holding a bottle of beer and chatting to hard left Labour MP Mary Foy (Durham).  People can be seen milling around in the background, one of whom is standing and eating from a plate, suggesting that there is some kind of social event in progress.  This would be in contravention of the coronavirus rules that Starmer and his colleagues expect the rest of us plebs to adhere to.
Click below for the video.
As of Sunday morning the only media outlet to cover this story is The Sun.  One can imagine the wall-to-wall hourly coverage if it had been Boris and chums.
It turns out that the footage was filmed on Friday night prior to Starmer's latest visit to Hartlepool for the crucial forthcoming by-election.  The gathering reportedly took place in a constituency office in nearby Durham.  A Labour spokesman told The Sun: "Keir was in the workplace, meeting a local MP in her constituency office and participating in an online Labour Party event.  They paused for dinner as the meeting was during the evening".
Going by the video this was clearly not a dinner setting and appears to be more of a buffet and a knees-up - a clear case of rules for thee, but not for me.
at May 02, 2021