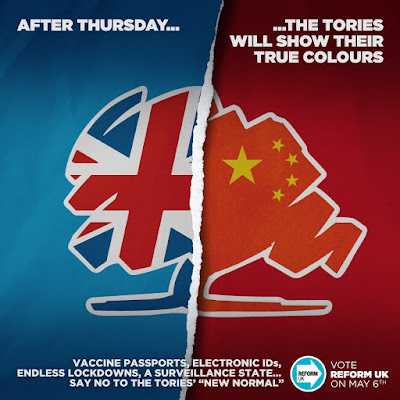 The politicians formerly known as the Brexit Party have been busy wooing anti-lockdown voters in a series of hard-hitting social media ads.  Vaccine passports have been the main focus of their campaign and they have even likened the Tories to the Chinese Communist Party.  That will sound absurd to lockdown enthusiasts who prefer to live in a constant state of fear and social control, but to critical thinkers who sense the direction of travel, it is prophecy.
Vaccine passports are ID cards by the back door.  They will not be 'temporary' as has been suggested and are ripe for expansion into more sinister methods of social control later on.  A dystopian social credit system, as used in China, is among the most feared potential developments. 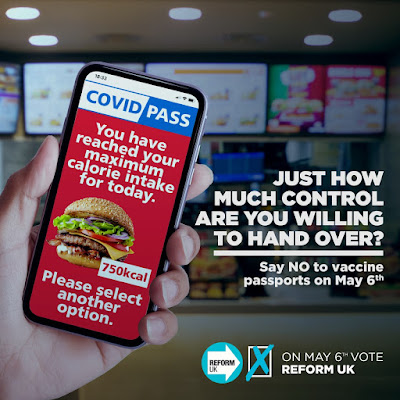 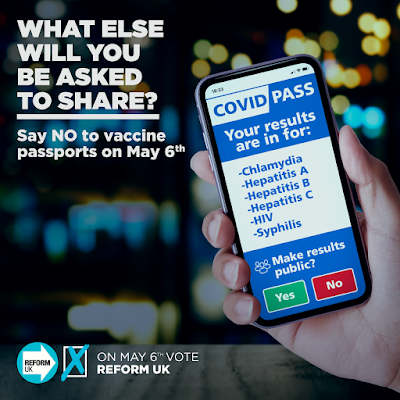 Thursday will be the first electoral test of Reform UK and we will see just how damaging or inspired that rebranding was.  Asides from the council elections, perhaps their best chance of maintaining elected office will be in the Senedd, but on current polling they look set to miss out.  UKIP polled slightly better in the most recent Senedd poll, but they are unlikely to win any seats either.
There is also an outside chance that Reform may sneak a seat on the London Assembly, but they will need to do better than the current two per cent they are on in the opinion polls.
Ex-Tory candidate and TV personality Dr David Bull is one of the Reform candidates in London.  He is one of the few Brexit Party MEPs that has remained active in the party and is currently Tice's right hand man following Farage's front line exit.  Below he discusses the intrusive, discriminatory and unnecessary imposition of vaccine passports.
at May 05, 2021