Keir Starmer's botched sacking of Angela Rayner has unleashed a beast of epic egotistical proportions.  As alluded to by Boris Johnson last week, Rayner may become hungrier the more titles she is fed.  On Sunday morning the new shadow first secretary of state/shadow secretary of state for the future of work/shadow chancellor of the Duchy of Lancaster boldly announced on Twitter that was 'proud to announce my Shadow Cabinet team'.  Note the word 'my'. 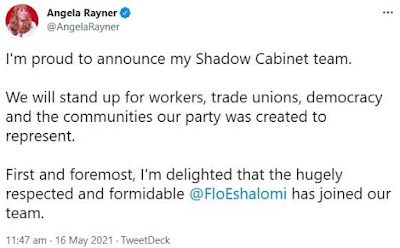 In addition to Labour moderate Florence Eshalomi as her new Parliamentary private secretary, Rayner went on to introduce two members of the hard left Socialist Campaign Group - Imran Hussain and Andy McDonald.  Also in her diverse 'Shadow Cabinet' would be the centrists Fleur Anderson and Jack Dromey (aka Mr Harriet Harman) and the soft left Cat Smith. 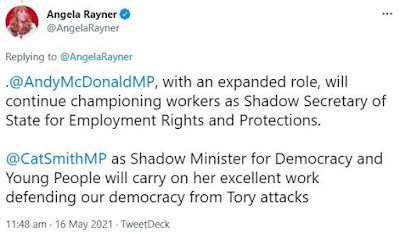 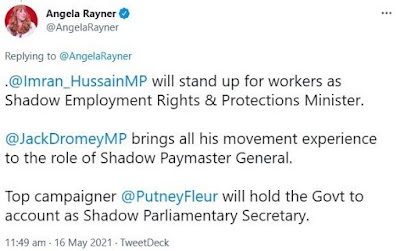 McDonald is a shadow secretary of state in his own right, so it's not clear how his 'expanded role' puts him beneath Rayner, except perhaps under her new 'future of work' remit - a role that Starmer appears to have hastily invented following his botched sacking.
A shadow cabinet inside a shadow cabinet doesn't bode well for Labour frontbench unity - how Starmer must be wishing Rosena Allin-Khan had won the deputy leadership contest.
While Rayner grows her power base inside the party, her exponentially growing ego took a battering on Tuesday from outside the party.  Making her debut in the House of Commons as shadow chancellor of the Duchy of Lancaster, Rayner rattled off an urgent (and lengthy) question regarding PPE contracts and various other allegations of Tory sleaze.  Having parked her arse back on the front bench, the smugness soon evaporated from her face as Penny Mordaunt responded to her question.  Halfway through Mordaunt's brutal take down Rayner put her face mask back on.  It was fitting that she would want to hide her face, after-all Mordaunt was only a stand-in for Rayner's opposite number, Michael Gove.
In fact Mordaunt is but the Paymaster General, a role shadowed by a mere subordinate in Rayner's 'shadow cabinet'.  Embarrassing.
at May 20, 2021