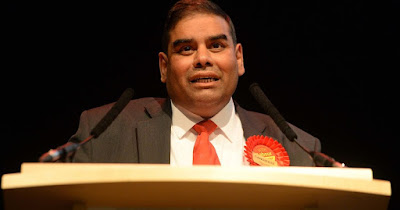 Khalid Mahmood has resigned from Labour's front bench.  The MP for Birmingham Perry Barr had been a shadow defence minister, but has stood down after publishing an article via Policy Exchange, which is intriguingly a conservative thinktank.  He also predicts that Labour will lose the West Midlands mayoral election, the largest mayoral contest outside London.
Mahmood writes:

"The Tories are deep into what was once safe Labour territory - the industrial heartlands of the North - with a 7,000 majority of their own.  In the West Midlands it looks again like Labour will lose out on the mayoral race and more.  Labour has lost touch with ordinary British people.  A London-based bourgeoisie, with the support of brigades of woke social media warriors, has effectively captured the party.  They mean well, of course, but their politics - obsessed with identity, division and even tech utopianism - have more in common with those of Californian high society than the kind of people who voted in Hartlepool yesterday.  The loudest voices in the Labour movement over the past year in particular have focused more on pulling down Churchill’s statue than they have on helping people pull themselves up in the world.  No wonder it is doing better among rich urban liberals and young university graduates than it is amongst the most important part of its traditional electoral coalition, the working-class".

He's not wrong is he?

If you are enjoying our election coverage please consider a small donation.  You can donate via PayPal here.
at May 07, 2021