BLAME THE GOVERNMENT, NOT EACH OTHER

by Richey Edwards
As we have written countless times on these pages, June 21 was never going to be the 'freedom day' that some sections of the press had labelled it.  Some restrictions would remain, while new restrictions would replace outgoing restrictions.  The problem that the government would face was in justifying its hold on totalitarian powers.  Now, with the much fabled Indian variant, a strategy is well underway to solve that tricky issue.
It begins with the Indian variant and ends with the public turning on each other, rather than blaming the government for this never-ending nightmare.  A 'divide and rule' strategy is at play, ably and enthusiastically supported by the media.
The media has spent a week or two now driving up fear of the Indian variant - despite no rise in cases, hospital admissions or deaths.  No, all those have remained stubbornly low, but as always the media never let the facts get in the way of project Covid.  Now, having been briefed by government sources, they have begun the next phase. 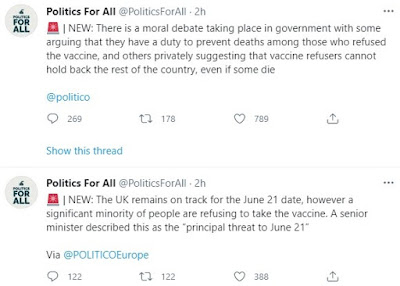 The keyword of the moment is 'refuse'.  The word is prevalent in media broadcasts, newspaper headlines and the Twitter feeds of Covid zealots.  It is being used to paint a negative picture of unvaccinated people, as if they are being unreasonable and non-compliant.  However, someone can only be non-compliant if something is mandatory and, unlike face masks and distancing, there is no such requirement for a vaccine.  Therefore, no-one is 'refusing' anything, they are merely exercising a civil right in choosing not to participate.
The word 'refuse' is being used as a coercive term in order to label and demonise a section of society.  It has even been incorporated into a new catchy term by some tabloids - refusenik - which, incidentally was originally a Soviet term.  How apt.  Refusenik joins a list of derogatory terms and phrases that have been used throughout the pandemic to demonise, alienate and whip up resentment - Covidiot, Covid-denier and anti-vaxxer are among the most obvious.  They all have one thing in common, they describe people who do not participate in the coronavirus circus ie. people who refuse to live in fear and under the thumb and control of the regime.  The LBC Radio presenter Shelagh Fogarty recently joked about 'poisoning' people who do not receive the vaccine.
In the age of woke, it's a begrudging credit to our machiavellian overlords that such sweeping generalisations have not resulted in an outcry.  For instance, it is not merely a choice for some people who don't have a Covid vaccination, they cannot for health reasons.  But that doesn't stop the media waging its judgemental war against anyone who has not received the vaccine.
The government is largely passive while this strategy unfolds, in fact they may even release soundbites to the contrary, such as suggestions that 'coercion is not the way'.  However, make no mistake, it is government that has initiated this ploy.
As with other countries around the world, vaccine uptake dips once all the at risk groups have been vaccinated.  It's a logical turn of events for anyone who understands the nature of Covid mortality - the virus overwhelmingly kills people who are already sick or very old.  That's why those groups are labelled 'at risk'.  But politicians, for whatever reason, are intent on vaccinating everybody anyway - including children who we were repeatedly told were at 'no risk' from the virus.  The Indian variant, or more correctly fear of the variant, has provided a tool with which to coerce more jabs into younger arms.  Cue images of hundreds of young people, masked up outdoors and fully compliant, forming long queues in Bolton and Blackburn to get their jabs.
With such a 'devastating' variant at large, only a selfish person would 'refuse' to get vaccinated.  Such sentiment has been echoed by Andrew Lloyd Webber in a much publicised interview.  Most youngsters will have never heard of the bloke, in fact it's difficult to recall the last time he filled any column inches at all, but his word is now gospel for the media and its hate campaign.  Mail on Sunday columnist Dan Hodges has gone further, suggesting that if vaccination is to remain voluntary, then vaccine passports  should be deployed in order to make life so uncomfortable for the unvaccinated filth that they are forced into compliance.  It will come as no surprise to anyone that Hodges is the Blairite son of former Labour MP Glenda Jackson.

At least Hodges accepts there is a consequence of a Covid-only NHS - millions are now waiting for routine operations as a result of the measures that lockdown enthusiasts like him demanded.  However, he only acknowledges the consequences now in order to justify his vaccine zealotry.
Hodge has since gone on to threaten a 'backlash' against people exercising their right not to take the vaccine.

This leads us to the current phase of the government's get out of jail plan, for which Hodge is a useful tool.  Government sources have now briefed media hacks that lockdown won't end on June 21 as promised - because of the minority of people who 'refuse' the vaccine.  The end result is that when pre-pandemic freedom fails to materialise, the public will not blame the government, but they will blame the unvaccinated and turn on them, instead of the politicians who initiated all these restrictions in the first place.
It's already happening.  Lockdown enthusiasts who have swallowed every word of media propaganda throughout the pandemic are already lashing out, albeit online - for now.  Once again, the politicians can sit back and marvel at just how fickle, stupid and unconsciously subservient their new subjects have proven to be.
There is a by-product of this current strategy that is also beneficial to the government.  By scapegoating the unvaccinated, it distracts from accusations that it is politicians who are the reason that the Indian variant is here in the first place.  Very few in the media dare mention it, but it's called the 'Indian variant' for a reason.  It comes from India.  That's the reason it was first discovered in towns with high Asian populations - another fact which the media dare not mention.  This was a direct consequence of the government shutting the gate after the horse had bolted, whether by simple neglect or by design.  Having said that, the fact remains that hospital admissions have not risen as a result of the variant - even at the heart of the outbreak, Bolton, there are just 19 Covid patients in hospitals.
There is no justification for prolonging restrictions - the Indian variant is no more deadly than the South African variant or the Brazilian variant.  Hospitals are empty.  One day last week there were no Covid deaths in England, Scotland or Northern Ireland.  When Britain re-opened last summer there were no vaccines, but now we are in a situation in which people at risk of the virus have received both jabs and had plenty of time for that immunity to build up.  To prolong restrictions now is not the fault of young people who choose not to receive a vaccine - it is the fault of politicians who refuse to let go of the totalitarian power they have savoured over the course of the last 14 months.
Don't fall into their trap.  We the people have power too, in fact we have so much of it that we could end all this tomorrow if we wanted it - but that can only happen if we are united.  If everyone binned their face masks the government would be powerless to stop it, they would bend to our will very quickly.  It is compliance by a majority that gives a minority the authority.  In other legitimate circumstances such as law and order, to govern by consent is perfectly normal, but what we have now is neither legitimate, normal or government by consent - it is government by decree.  They divide us, so they can rule us and if we are to be ruled then we are no longer a liberal democracy.  That's what is at stake.
at May 18, 2021