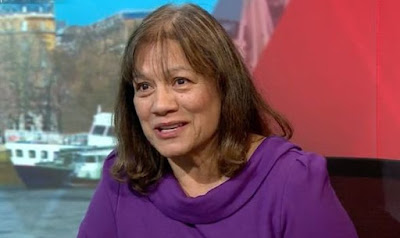 Ex-Labour frontbencher Valerie Vaz has apologised after appearing to suggest something untoward about Boris Johnson's Covid illness last spring.  The MP for Walsall South made the extraordinary remarks on the BBC's Politics Live on Monday, much to the disgust of Tory MP Simon Clarke.  When asked by host Jo Coburn if she wished to rescind the comments, Vaz dodged the question and said: "None of us were in the room".
Vaz's remarks came during a debate on Dominic Cummings' latest allegations about the government's conduct during the pandemic.  Also taking part were former Labour MP Caroline Flint and ex-Tory MP Matthew Parris.  Flint branded Vaz's remarks 'terrible'.  By Monday evening Vaz had apologised, telling BirminghamLive: "I have had the opportunity to watch my comments on Politics Live today.  I wish to clarify my remarks and apologise if any offence was caused.  I never intended to give the suggestion that the Prime Minister was not seriously ill".
Click below for the clip.
Vaz was sacked from Labour's front bench in Starmer's emergency post-election reshuffle.  She had been the shadow leader of the House of Commons.  In hindsight that has saved the Labour leader further embarrassment now.
at May 25, 2021