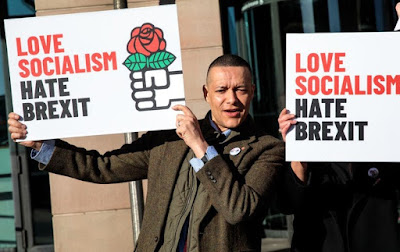 Norwich South MP Clive Lewis has become the second to declare his intention to contest the Labour leadership.  Lewis has harboured leadership ambitions for some time and was lining up a challenge to Corbyn in 2017, prior to the surprise general election result.  Back then he was supported by Guardian columnist and perennial backstabber Owen Jones.  No word yet from the wee lad this time and it remains to be seen whether Momentum will rally around hard left Lewis as the continuity option or, as expected, go with Rebecca Long-Bailey if and when she enters the contest.

His left-wing credentials will certainly go in his favour among the membership at large, but would they go for another male Londoner?  At the next election the party will need to claw back voters in their Brexit-voting heartlands and an ardent Remainer from the south will probably not be seen as the best way to achieve that.  Lewis is currently neck and neck with Lady Nugee at the bookies, but his odds could shorten in the coming days.
at December 20, 2019