Earlier this month a Gloucestershire Labour councillor responded to the general election defeat by suggesting that all Tory MPs should be shot. 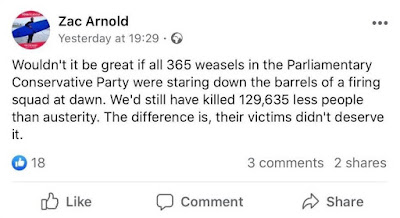 Cllr Zac Arnold, a young Labour activist and member of Lydney Town Council, has since deleted the Facebook post.  It's not the first time he's courted controversy.  Earlier this year he was arrested after refusing to leave a council meeting and he was referred to the council's standards committee this month (prior to his Facebook post).  The committee is to investigate two complaints relating to councillors' code of conduct.

Arnold is listed as a 'youth officer' in his local Constituency Labour Party, clearly setting another fine example of 'kinder, gentler politics' to the Labour youth.

Thanks to David Baker for providing this story.
at December 31, 2019