ON THE SIXTH DAY OF CHRISTMAS...

We bring you Brexit betrayal from the 27th of January, originally shared 16,509 times.  After MPs voted down May's Withdrawal Agreement the first whiff of Brexit betrayal was in the air as May suggested that the March 29th deadline was not set in stone after all and Corbyn was open to a second referendum. 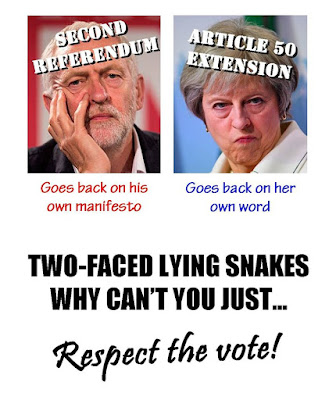 The Twelve Memes of Christmas is an annual countdown of the most shared memes from our Facebook page throughout the course of the year.
at December 30, 2019