The major seaport of Southampton has been a city since 1964, although it did not obtain full unitary authority status until 1997.  Before this Southampton was administered as a district within Hampshire County Council.  Since then Southampton City Council has been administered by all three of the main parties.  For Westminster elections the city has been fought over by the same parties for decades.  Going into this election the Tories have two of the three seats. 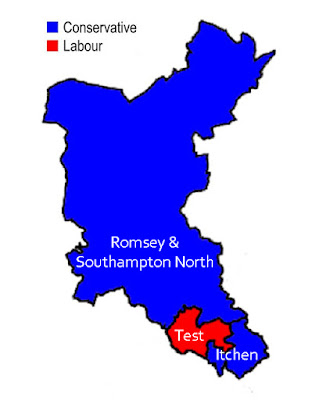 Southampton City Council consists of 16 electoral wards, each returning three councillors.  Labour has controlled the council twice - from 1997-2000 and since 2012.  The Conservatives had control between 2008-2012.  There were eight years of no overall control in the noughties, during which Labour ran a minority administration for two years, followed by the Lib Dems for four years, followed by the Tories for two.  The Lib Dems lost their last council seats in 2014, due in large part to their role in the coalition government.

The constituencies of Test and Itchen are named after the two major rivers that meet here.

Southampton returned a Leave vote in 2016, although the Labour member for Test opposed the triggering of Article 50.  His constituency returned a narrow 50.59% Remain vote.  Leave voting Itchen is currently held by the Conservatives with one of the smallest majorities in the UK at just 31 votes.  None of these seats are expected to change hands at this election.

Southampton Itchen has been held by the Conservatives since 2015, before which it was Labour.  Smith is defending one of the smallest majorities in the country.

Southampton Test has been held by Labour since 1997, before which it was held by the Conservatives

Incumbent:  Caroline Nokes (Con), majority 18,006
Born:  Hampshire, 1972
First elected:  2010
Leave/Remain:  Remain, but voted to trigger Article 50
Notes:  Nokes was elected to Parliament at the third attempt.  A member of Theresa May's cabinet until she was sacked by new PM Boris Johnson.  She was one of 21 MPs to have the whip removed after voting to extend Article 50, but later had the whip restored.  She is defending her seat in this election as a Conservative.

Romsey & Southampton North has been held by the Conservatives since it was created through boundary changes in 2010.  The new entity largely resembled the abolished Romsey constituency, this had been held by the Liberal Democrats since a by-election in 2000.

Note:  This is a Remain Alliance seat where the Green Party have stood aside to give the Liberal Democrats a free run.


Please support our work by donating what you can here
at December 12, 2019