Corbynistas were cock-a-hoop about the celebrity endorsements rolling in over the course of the campaign.  Not many came out for Boris it has to be said, a fact that the balloon heads following Corbyn couldn't help but keep reminding their Twitter followers about.  But what happens when a celeb endorses the Conservatives or merely criticises Corbyn?  That's right, they're harassed to the moon and back by the spiteful morons of the left.  Point in case - Rod Stewart this very day.  The rock star made a throwaway remark in a tweet celebrating his latest number one album.  In between references to fellow musicians Robbie Williams and Pete Townshend, he had the audacity to congratulate Boris Johnson. 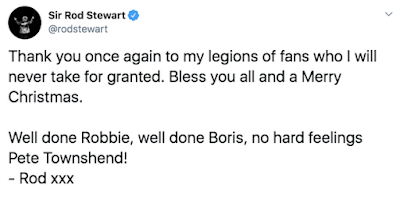 #RodStewart is a scummy Tory fuck and he shouldn't be welcome at Celtic park ever again
— ScottXaviBrown (@Indysco500) December 14, 2019

Rod Stewart is a Israeli Apartheid Supporting Tory Knight of the British Realm, he is the literal Antithesis of everything we as Celts stand for. Why anyone buys into his fake propaganda shite is baffling, he can fuck off an die the decrepit oul Cunt ✊ 💦
— Tomás O'Bolíngoli (@voices_stop) December 14, 2019

Slamming #RodStewart for ignoring his working class roots shows these anti democracy tossers have the intellectual ability of a mollusc. Who do they think voted Conservative in Blyth, Workington, Stoke and everywhere else? Did they forget they were working class too?
— Thomas Fairfax (@fairfax_thomas) December 14, 2019

And this is why more celebs don’t come out and say they support the tories
The far left latch onto it and abuse and attack relentlessly
It seems your not allowed to have different opinions than other people nowadays #RodStewart
— Alex Benson-Wilson (@alexbw11) December 14, 2019