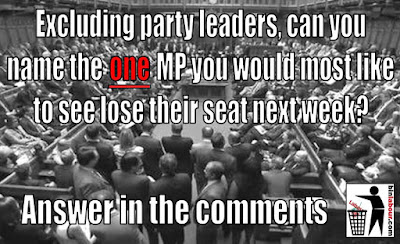 It's a bit later than promised, but the results from the above Facebook post can finally be revealed.  There were almost two thousand responses when we went through them over the weekend and 186 names were submitted.  Not all of them were defending their seats at this election.  The most obvious example was Ken Clarke (six votes) - he stood down.  Around a quarter of the votes were ineligible because they failed to observe the simple rules set down in the post - excluding party leaders, name one MP.  Votes for Corbyn (there were at least a few dozen) and Swinson (a handful) were ignored, as were votes that named more than one individual (hundreds).  There were also a number of votes rejected that we suspect may have been intended for John McDonnell, but were submitted as 'McDonald' and could have been potentially been intended for his colleague Andy McDonald.

These were the top responses and as you can see it was a very close call between the top two.  In brackets we've included the likelihood of them actually losing their seats.