The Shadow Home Secretary has finally emerged this morning following her 'stay at home' orders during the election campaign (and her son's troubles).  In a tweet below from her neighbouring candidate Meg Hillier, the pair are seen outside a train station in Hackney (tweet has now been deleted - albeit rather late in the day having already made the news).


It was eagle-eyed Twitter users who spotted the anomaly... 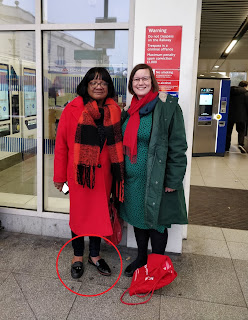 Fair to say Diane has been knocking back those mojitos during her absence!
at December 12, 2019