YouGov has updated their 'MRP' prediction for Thursday.  You may recall that this polling method was the only one that successfully predicted the hung Parliament of 2017.  The revised findings do not look good at all and suggest that the Tories are in free-fall, albeit still in majority territory.  The new seat predictions are as follows (+/- changes against previous poll two weeks ago).

As you can see the Tory majority has supposedly halved over the last two weeks with 20 seats now predicted to remain Labour.  This is particularly worrying if it indicates movement of travel going into the last couple of days.  Most of the information for this poll was gathered over the last seven days and if a late Labour surge is still in progress then a hung Parliament is a very real prospect.

For in-depth analysis and seat by seat forecasts click here. 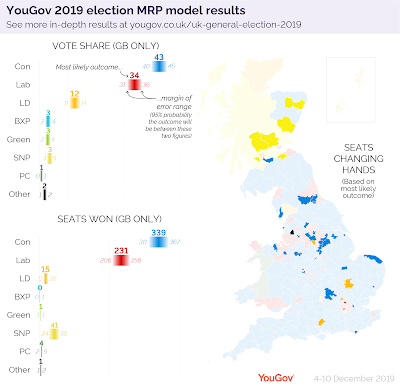