Channel 4 News created a storm of controversy today with a clip of Boris Johnson making a speech about immigration.  In the clip Boris says he is in "favour of having people of talent come to this country".  However, astonishingly the Channel 4 subtitles announced that he said "people of colour".  While some commentators have suggested that this was a deliberate smear, the broadcaster has removed the video and apologised for what it claims was an 'error'.  Adding fuel to the fire is the fact that when the same clip appeared on the BBC the moment where Boris says 'talent' is clearly audible, whereas in the Channel 4 version it is slightly muffled.  Watch the two versions below and make your own mind up.

Thousands of Twitter users had already made their mind up by the time Channel 4 pulled the plug and #PeopleOfColour has been trending for much of the day.  Many high profile Corbynistas have used the Channel 4 clip for propaganda purposes and at least one prominent MP decided to make capital out it. 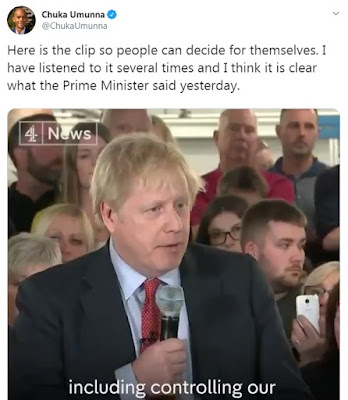 Chuka has since deleted this tweet, although many tweets remain, either from morons steadfast in their delusion or people just being deliberately misleading.  Here is the Channel 4 apology. 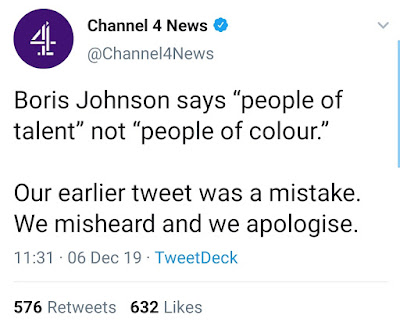