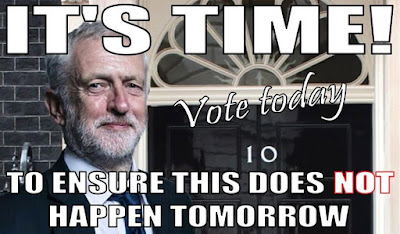 The polls are open and we are potentially witnessing Britain's final hours of freedom, democracy and economic stability.  A hung Parliament would result in more paralysis and if Jeremy Corbyn was to form a government then Brexit is dead and this country will be in the hands of communists for the first time in our history.  Make no mistake, they would not relinquish power easily, no matter how bad things got for them, or us.  Remember that in communist countries the top people always flourish while everyone else suffers.  At the end of a communist regime the only wealthy people left are those in charge.

If tonight's results begin to suggest Labour could be in coalition territory (courtesy of the SNP), then our country would haemorrhage wealth by the hour.  The pound would crash, businesses would offshore their accounts and business people would head to the airports.  The truth about Labour's claim to 'only' tax the top five per cent is unworkable for one simple reason - they can't be taxed if their money isn't here.  If the wealth is not here to pay for Labour's brazen pledges who pays then?  Sure, they'll borrow, they always do.  That's one of the reasons we've had austerity for the last nine years - the last Labour government bankrupted our nation.  They'll do it again, except this time it will be much, much worse.

Corbyn and McDonnell would crash our economy, there's no doubt about that.  After that happens, the blame game begins.  This is when it becomes truly terrifying.  Corbyn's thugs would be empowered and emboldened by his premiership.  You only have to see the unabridged hate and bile they spew forth on social media to know that it would spill out into the streets as they blame anyone but Corbyn.  The rich will be targeted - any that remain.  Business owners will be targeted, and their businesses.  The press would be hit - not just right-leaning rags, but the BBC and Sky - anyone who is broadcasting the truth.  The Conservatives, Brexit Party, Liberal Democrats, anyone who doesn't share their hard left ideology would be fair game.  And, of course, the Jews.  The word pogrom springs to mind.

Things will go downhill pretty fast and it would take our country possibly decades to recover.  If an alternative government was eventually formed they would have to embark on a period of harsh austerity to try and repair the damage.  However, we know what happens when a government conducts austerity - the opposition take advantage (but never responsibility).  It's a vicious cycle, but one that can only be ended by ensuring we do not give Labour the opportunity to ruin our economy (again).