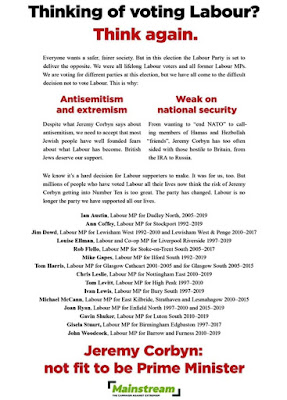 15 former Labour MPs have put their names to an advert today urging voters to "think again" about backing Labour.  This is not simply a collection of pro-Brexit, Tory-backing ex-members, far from it.  This is a diverse group coming at from a variety of political angles.  There are the ardent Brexiteers Tom Harris and Gisela Stuart, but there are also ardent Remainers such as Mike Gapes, Ann Coffey, Louise Ellman and Chris Leslie.  The latter group are certainly not advocating a vote for the Tories, just anyone but Corbyn.  However, as there are only two scenarios on Friday - either Brexit with Boris or the death of Brexit with Corbyn, they will clearly be relieved to see a Boris victory.  That says a lot about how emotive feelings are towards Corbyn and safeguarding the security of our nation - in that individuals so vociferously opposed to Brexit would rather see Brexit happen than have their former leader running the country.

Click on the images below for a better look at the full text.