The capital city of Wales is the eleventh largest city in the UK.  The Welsh name for Cardiff is Caerdydd, although only one in five residents can speak the language.  Despite being surrounded by one of Labour's most famous heartlands - the Valleys - Labour have rarely held all four Parliamentary seats over the years.  In 2017 they captured Cardiff North from the Conservatives and for the first time in 12 years the city turned completely red.  The city is split into these same divisions for elections to the Welsh Assembly (the Senedd) and all four seats are also currently held by Labour.  The First Minister of Wales, Mark Drakeford, represents Cardiff West in the Senedd. 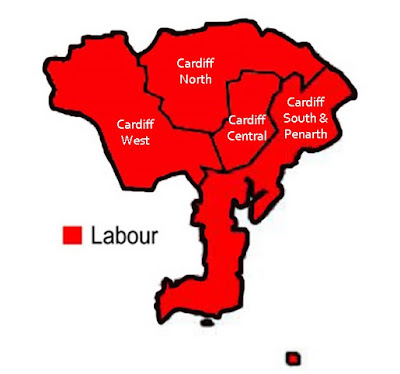 Cardiff is the seat of devolved power in Wales, despite voting decisively to reject devolution in the 1997 referendum.  The city returned a 56% no vote, but the national result meant devolution was carried by the slimmest of margins - 0.6%.  Labour became the biggest party in Cardiff's unwanted assembly following the first elections to it in 1999.  The party has been in government ever since, albeit never with a majority, governing by coalition or minority.  Following the last elections in 2016 Labour has been in government with the Liberal Democrats (for the second time).  Labour was also in a coalition with Plaid Cymru between 2007 and 2011.

The four assembly members for Cardiff are as follows:

For local government the city is administered by the City and County of Cardiff Council.  A bit of a mouthful it is usually referred to as merely Cardiff Council.  This replaced the former city council authority in 1995.  Labour has been the dominant power over the years, regaining full control in 2012 following the collapse of the Lib Dem vote.  The Lib Dems ran a minority administration between 2004 and 2008, prior to forming a coalition with Plaid Cymru.  The last time the Tories were in control here was in 1987.

Cardiff returned a significant Remain vote in 2016 and all four of its MPs are ardent Remainers.  When MPs voted on triggering Article 50 in 2017 the three Labour MPs at that time all voted against.  The Conservative MP for Cardiff North, Craig Williams, voted in favour.  In the 2016 leadership challenge to Jeremy Corbyn all the Cardiff Labour MPs supported Owen Smith.

Cardiff Central has been held by Labour since 2015, before which it was held by the Liberal Democrats since 2005.

Note:  This is a Remain Alliance seat where Plaid Cymru and the Green Party have stood aside to give the Liberal Democrats a free run.

Incumbent:  Anna McMorrin (Lab), majority 4,174
Born:  1971
First elected:  2017
Leave/Remain:  Remain
Notes:  Ardent Remainer.  She claims to have grown up near Brecon, but for some unknown reason her birthplace is a closely guarded secret.

Cardiff West has been held by Labour since 1987, before which it was briefly held by the Conservatives for one Parliamentary term

Please support our work by donating what you can here
at December 05, 2019