Twitter users awoke this morning to find a shocking trend on their feeds - #OwenJonesIsAWankerDay.  Apparently the milestone stems from the heckling he received during an outside broadcast last December.  Novara Media's Ash Sarkar was clearly triggered by the tag and pointed it out to her pal Owen, who will surely have spent much of this morning banning users from his account. 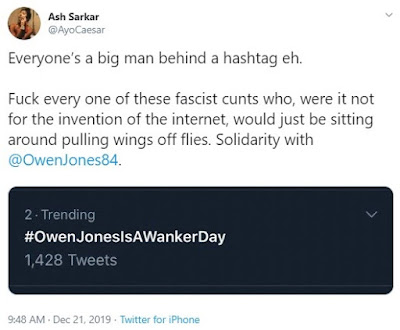 She famously told Piers Morgan that she is 'literally a communist'.  What we've learnt from this tweet is that Ash is still 'literally' seething about Corbyn's election humiliation.
at December 21, 2019