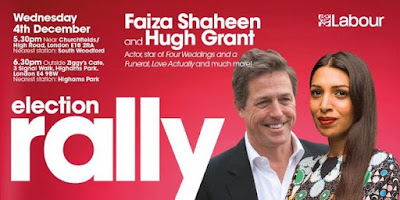 Foul-mouthed Remainer Hugh Grant was in the north London constituency of Chingford and Woodford Green on Wednesday night to support the Labour candidate.  He's been touring constituencies recently in support of Remain candidates from various parties, including Luciana Berger of the Lib Dems and ex-Tory Dominic Grieve (standing as an independent).  Hugh's goal is to unseat Conservatives and replace them with Remainers, something that is a distinct possibility in Chingford.  The incumbent Iain Duncan Smith saw his majority slashed by 6,000 votes in 2017 and Labour are chucking a lot of resources at the seat in the hope of making it a Labour gain on Thursday.

Unfortunately for Hugh Grant, his well publicised appearance attracted the attention of various anti-racism campaigners who were keen to disrupt the event.  The actor looked shell-shocked as one protester ambushed him with a question about "the Jews of this community".  The Labour candidate, Corbyn loyalist Faiza Shaheen, is seen to draw a sigh and roll her eyes before she intervenes and rescues Grant who is flapping like one of his trademark film characters.

Things are later seen to take a nasty turn as an angry Labour supporter confronts the protesters and calls one of them a "stupid old ****" before the police intervene.  The protesters later surrounded Hugh Grant's car as he attempted to leave.  A spectacular own goal!