One of Labour's new MPs caused a bit of a stir with this speech yesterday.  By slamming "40 years of Thatcherism" in her maiden speech, Zarah Sultana painted 13 years of Labour rule with the same brush.  However, her hatred for Blairism was already common knowledge before she entered Parliament.  During the election campaign she was forced to apologise for a tweet in which she said she would celebrate Blair's death. 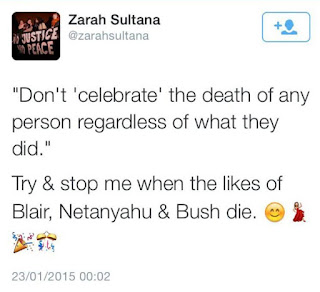 Regardless of the divisive message in her speech, senior Labour figures were falling over each other to complement the young MP.  She was lauded on Twitter by leading frontbenchers including John McDonnell, Diane Abbott and Angela Rayner.  Further evidence that even if a moderate leader is elected on April 4, the party is painfully divided.  On the other hand, if the woefully unelectable hard left manage to keep Corbynism going, Sultana's place on the gravy train may be short-lived.  She has a wafer thin majority, despite coming into the election defending a 7,947 majority from the previous Labour MP.  As long as the Tories don't make a pig's ear of post-Brexit Britain she should be gone in five years.