Manchester has been in the spotlight this week thanks to a new report that confirmed that both Greater Manchester Police and Manchester City Council had aided and abetted Muslim grooming gangs based in the city.  While the bulk of the report relates to paedophile activity in south Manchester, the title of the report refers to Greater Manchester, a conurbation that takes in many towns including the scene of one of the UK's most infamous cases - Rochdale.  Grooming activity has also been reported in Bolton, Bury, Oldham and Wigan, although convictions are sorely lacking.

Labour has a diabolical record on grooming gangs, dating back more than a decade.  Gordon Brown as PM is alleged to have urged police forces to turn a blind eye in 2008.  Countless Labour councils around the country have been implicated in covering up for grooming gangs and senior Labour figures won't even mention the scandal, let alone condemn it.  Even the one frontbencher who dared to raise the issue and was summarily sacked for doing so was herself a part of the problem.  In an interview with ITV in 2014 Sarah Champion defended the perpetrators by claiming that most child abusers were white men. 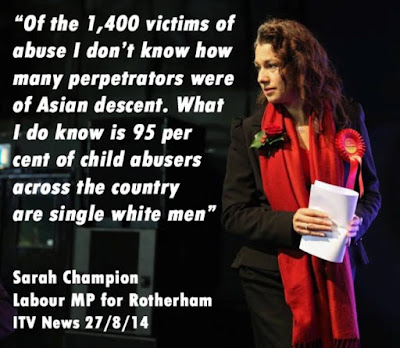 Some Labour MPs are notoriously prolific on Twitter, but you won't uncover many tweets relating to grooming gangs on their accounts.  For instance Diane Abbott has tweeted or retweeted 28 times since the latest report was released and while she is keen to talk about refugees, Windrush and 'racism' against Meghan Markle, there's not a single mention of industrial scale rape of English children.  In Greater Manchester itself only two of the 17 Labour MPs on Twitter - Afzal Khan (Manchester Gorton) and Lucy Powell (Manchester Central) - wrote anything about the grooming report.  Powell wrote:  "This hard-hitting review exposes starkly serious failures of police, social services and others to protect vulnerable young women & girls 15 years ago.  Undoubtedly culture and practice has changed markedly since, however still serious lessons & questions".  No, Lucy, nothing has changed.

The three Greater Manchester MPs who are currently campaigning to be either leader or deputy leader also ignored the issue, but all three (Long-Bailey, Nandy and Rayner) tweeted about Islamophobia.  It appears that where Labour MPs are concerned, defending Muslim voters from criticism is more important than protecting English girls from Muslim rapists.
at January 16, 2020