This week's Question Time featured a rather humdrum line-up at first glance, but there was always the wildcard celeb who might spice things up a bit.  It's fair to say that actor Laurence Fox did a little more than that.  Twitter is still in meltdown 24 hours later.

One of several outstanding contributions Fox made to the programme was his assessment of identity politics that resulted in a huge online backlash from the left.  He later expanded on this, but crossed a red line on all establishment fronts - he mentioned grooming gangs.

One of the thousands of Twitter followers incensed by Fox's antics was the Remain campaigner Femi Izawally.  He issued a series of tweets condemning Fox, including one supposedly featuring a clip from the programme.  However, as you can see below there is a key difference between what was actually broadcast on BBC1 and the edited version he put out to his 245,000 Twitter followers...


Next time you see his smug face on TV, just remember that he is not just an affront to democracy, he is another enabler of the industrial scale rape of English girls by Muslim gangs.  They have been allowed to get away with this for years because of a conspiracy of silence, something which Laurence Fox alluded to, and something which the odious Femi has proven with his shockingly poor edit. 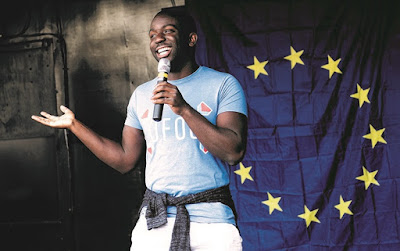