A YouGov poll of Labour members has put Keir Starmer way ahead of the hard left's choice Rebecca Long-Bailey.  The poll did not include Dave Lammy, Dan Jarvis or Ian Lavery, despite the trio having suggested they could run.  Lisa Nandy, one of only two northerners featured and the least pro-Remain, came last. 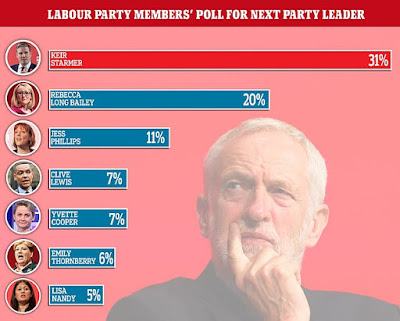 Following the poll Starmer's odds were slashed by the bookies and he is now odds-on across the board.  There are still only two declared runners (Lewis and Thornberry), but more are expected to officially enter the race in the coming weeks.  There's still no date for the election, but the longer it's delayed the harder it will be for the far left to triumph.