MORE THAN A 'CRASH' JEZ

Jeremy Corbyn has been heavily criticised over his reaction to the downed Ukrainian plane that was shot down by Iran.  On both his Facebook and Twitter accounts he described the incident as a "plane crash" and although there was a reference to an "appalling act", there was a complete lack of condemnation.  Sound familiar? 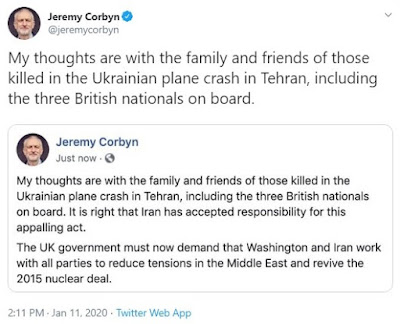 It's very much similar to his reaction to the Islamist attacks in London and Manchester in 2017, which he referred to as 'incidents' (as did Diane Abbott).  However, later that year he condemned the attack on Muslim worshippers at Finsbury Park as an "act of terror".  It's not difficult to see where his loyalties lie.

At a speech he gave to an 'anti-war' demonstration in London yesterday he said there "was no excuse for shooting down an airliner and there's no excuse for a targeted assassination either".  As he addressed the assembled mob of leftists he was shadowed by the controversial anti-Semite Salma Yaqoob.  She only joined Labour last year, but inexplicably rose to prominence and is the hard left's preferred candidate for West Midlands mayor in May.

Corbyn wasn't the only Labour figure to express Iranian sympathies yesterday.  The odious member for Huddersfield took the following sideswipe at President Trump.

No-one wants a war with Iran, the left do not own that sentiment.  Their so-called 'anti-war' message is nothing but opportunistic anti-West rhetoric and one-sided condemnation, twisted by anti-Semitism and Islamist sympathies.
at January 12, 2020