ON THE TWELFTH DAY OF CHRISTMAS...

We bring you left-wing hypocrisy of the highest order and our most shared meme of the past year.  Originally posted on the 14th of February and shared 33,982 times, it refers to the outcry over Liam Neeson's interview in which he discussed his quest for vengeance almost 40 years ago after a female friend was raped by a black man. 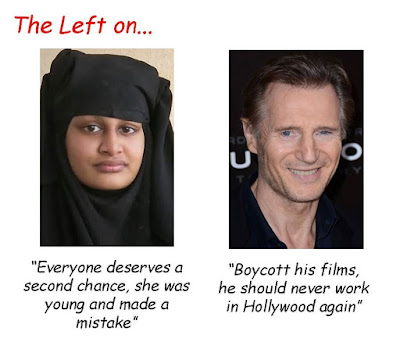 That's all for this season's 12 Memes of Christmas, here's hoping we're still around on Facebook to see it to next Christmas!
at January 05, 2020