Labour's Ali Milani received a lot of attention during the general election with his lofty hopes of unseating Boris Johnson in Uxbridge.  The Hillingdon councillor ultimately failed, but raised his profile immeasurably, including that of his own anti-Semitism.  On Thursday he tweeted details about an alleged Islamophobic attack in Uxbridge and directly linked it to comments made by Boris Johnson.  See the tweet below, including a video of the incident.


Seriously concerned about receiving news of a possible Islamophobic attack outside my local Mosque in Uxbridge.

I recieved this CCTV footage last night. Full details still unclear - though the parking space is visibly designated for the imam.

This is the country we live in now. pic.twitter.com/K8KxpEqtjQ
— Ali Milani (@ARMilani_) January 9, 2020


By his own admission the details are unclear, but this hasn't stopped him from jumping to several conclusions.  However, there are several inconsistencies that suggest Milani has been more than liberal with the truth.  Milani claims that the attack took place outside his local mosque, except that it didn't.  The mosque site occupies 4-5 Cowley Mill Road, but in the video there is a white horizontal picket fence clearly visible on the opposite side of the road.  The white picket fence is much further up the road directly opposite 13 Cowley Mill Road.  The attacker marches diagonally across the road from here and there are several other indicators that confirm that the incident actually occurs at the top of a lane next to 9 Cowley Mill Road (see evidence below). 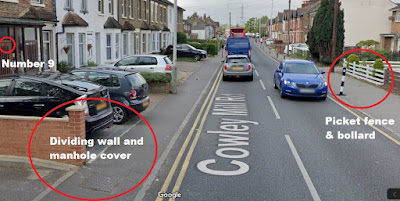 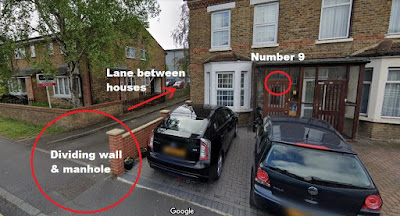 Video from outside the mosque is used later in Milani's video and shows the car slowing down before speeding away as the assailant approaches again.  Milani refers to a parking space in his tweet 'visibly dedicated for the imam', but the car is not reversing into a parking space, it's reversing into a lane.  Even if the car has just left the mosque, a possibility given the direction of travel, when the video cuts to CCTV from the mosque there appears to be no spaces left outside it.

No-one here is justifying any act of violence, we are merely pointing out a complete lack of context and/or evidence contained within this video to suggest any motive.  The fact that the attack does not take place where Milani tells us only adds to the confusion.
at January 09, 2020