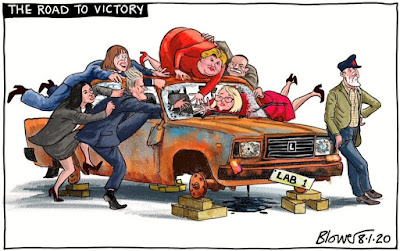 The Labour leadership contest has officially begun with MPs and MEPs able to nominate their favoured candidates.  Nominations close on Monday, at which point we will probably see the field narrow.  Each candidate must receive nominations from at least ten percent of MPs/MEPs to continue, or 22 to be precise.

At the moment Emily Thornberry has yet to receive a single nomination other than herself, while Clive Lewis is also struggling with two public endorsements.  Both are highly likely to fall at this first hurdle and leave four to enter the next stage of nominations - constituency parties and party affiliates.  Some have suggested that Lisa Nandy may also struggle to obtain the magic number, but she has reportedly emerged as the big winner from hustings held on Tuesday evening.  Jess Phillips also reportedly impressed, sadly.

Following all the latest developments, including the NEC's attempt to sway things in favour of Long-Bailey, the odds at the bookies have drifted on Starmer, but shortened on Long-Bailey and Nandy.  They remain the top three runners across the board at all the main bookmakers.