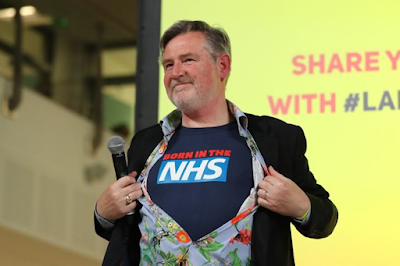 The subject of Barry Gardiner's dubious leadership bid was discussed on Politics Live on Thursday.  Andrew Neil introduced the topic by mocking Barry's t-shirt, as featured in the Huffington Post coverage.  "I think pretty much all of us were born in the NHS" he noted, leading to much giggling across the panel.  Even backbench Labour idiot Lloyd Russell-Wotsit joined in the laughter.

At the time of writing there are only 64 MPs/MEPs left to nominate a candidate and still no solid commitment to his supposed leadership bid, so what on earth Barry Gardiner is playing at is anyone's guess.  What we do know is that there will definitely be four candidates proceeding to the next stage after Long-Bailey, Nandy and Phillips all reached the 22 nomination threshold on Thursday.  Thornberry requires another 12 to continue, while Clive Lewis appears dead in the water with just four nominations thus far.
at January 09, 2020