Survation have carried out a leadership poll of Labour members and given Rebecca Long-Bailey a 5 point lead over Keir Starmer, with a 2 point lead in the run-off.  The poll of 3,835 members was conducted between 8-13 January, with first preference votes as follows.

The Survation poll will be a huge boost to Long-Bailey and the hard left, having watched as Starmer becomes increasingly seen as the runaway favourite.  Meanwhile, a 'team photo' emerged this afternoon showing Long-Bailey and her pal Angela Rayner.  She doesn't look very leader-like, while Rayner looks like she's off out on the razzle in this bizarre graphic posted by Labour MP Lloyd Russell-Moyle. 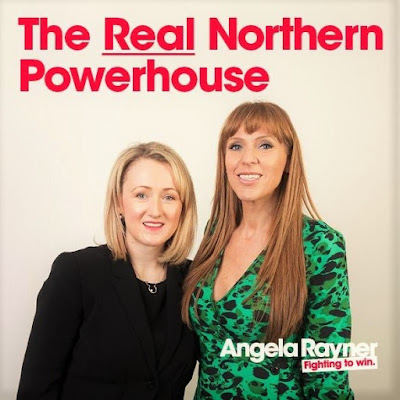 Long-Bailey had begged Momentum to back Rayner for the deputy's position and the organisation has now written to its members making such a recommendation.  Long-Bailey clearly has some clout with Lansman and co, although many Corbynistas will be supporting hard left loon Richard Burgon in the deputy leadership contest.
at January 15, 2020