The editor of far left media outlet 'The Canary' called for members of Labour Friends of Israel to be barred from the leadership contest.  Appearing to reference the entrance of Jess Phillips, she also clarified that Emily Thornberry should not be allowed to participate either.  Both are members of the group. 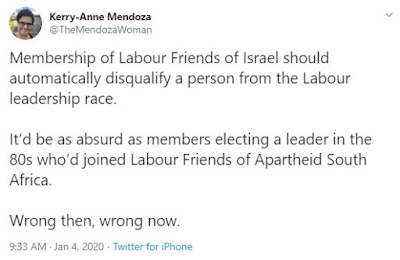 Mendoza displays all the traits reminiscent of a spoilt millennial communist - everyone whose opinion she doesn't like is wrong and should be silenced.  If Corbyn had triumphed she would be calling for them to be silenced - permanently.  Dangerous people rightly rejected by the British electorate!
at January 04, 2020