Last week we witnessed the most publicity for Muslim grooming gangs since the broadcast of Three Girls in 2017.  Beginning with a report into grooming activity in south Manchester, the spectre of the Rotherham case raised its head a few days later.  Both news items were a damning indictment on our police forces, but we should never forget the role of local authorities in the cover-up also.  Of course we all know who runs those local authorities. 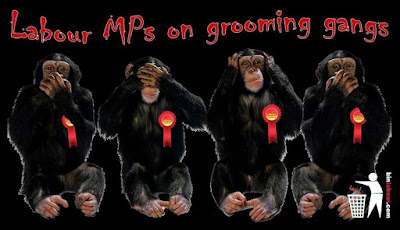 The four monkeys - or the traditional three - have appeared before in our grooming gang memes.  Unfortunately Facebook does not tolerate references to Muslim gangs and has removed such memes several times.  Therefore we can now only use the generic term 'grooming gangs'.  Social media has not just dictated the narrative, they have conspired to conceal the truth and are as guilty as the police forces and local authorities involved in aiding and abetting these sickening crimes.

The above meme survived censorship and was shared 2,122 times via the Facebook page.
at January 19, 2020