Last week Labour MPs were falling over each other to condemn the government after a pledge on child migrants was removed from the Brexit Bill.  The Withdrawal Agreement had previously contained a commitment to grant child 'refugees' automatic rights to join their families in the UK.  Labour MPs tried to have the pledge reinstated, but were voted down, leading to an outpouring of grief on their Twitter accounts.  We duly noted that the same MPs were strangely silent about the treatment of our own children in Rochdale and elsewhere, while the only one to condemn the Muslim grooming gangs was promptly sacked by Jeremy Corbyn.  The hypocrisy is sickening. 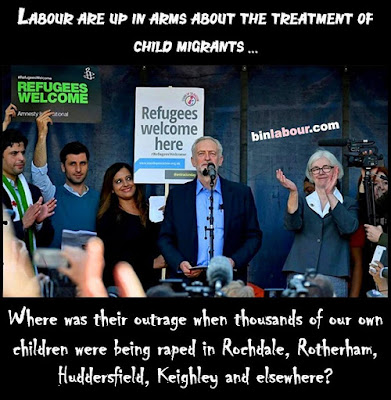