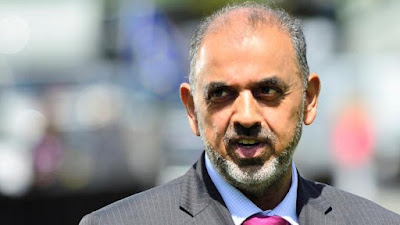 Baron Ahmed of Rotherham has been charged with three sexual offences.  The Times reports that the charges - two attempted rapes and one indecent assault - relate to a girl and a boy under the age of 13.  Two men have been charged alongside Ahmed - Mohamed Farouq, 68, accused of four indecent assaults, and Mohammed Tariq, 63, accused of two counts of indecent assault.  All three men are from Rotherham.  The attacks allegedly took place in the 1970s.

Lord Ahmed already has a criminal record dating back to 2009 when he was convicted of dangerous driving.  He escaped the more serious charge of causing death by dangerous driving, despite the fact he killed a man on the M1 after having sent several text messages while at the wheel of his Jaguar.  He served just 16 days of a 12 week sentence.

Lord Nazir Ahmed was born in Pakistan and came to Britain in the late 1960s as a child.  He joined the Labour party in 1975, aged 18.  He became Rotherham's first Muslim councillor in 1990 and was appointed a life peer in 1998.

He was suspended by Labour in 2013 after giving an interview in which he blamed a 'Jewish conspiracy' for his conviction.  He resigned the party whip two days before his case was due to be heard by Labour's National Executive Committee.

Last month Lord Ahmed was accused of 'taking advantage of vulnerable women' in his role as a peer.
at March 01, 2019